In 1975, Mrs. Hawayo Takata, the Japanese-American woman who brought Reiki to the West, presented many Reiki classes and lectures at the Trinity Metaphysical Center, in Redwood City, CA.  Trinity Metaphysical Center was a chapter in the Universal Church of the Master, and also served as the first Reiki center in the United States.  John’s former wife, the Reverend Beth Gray, was its pastor, and John Harvey Gray was the Reiki Master in charge of its Reiki Wellness Center. Takata, as she liked be called, granted John Harvey Gray permission to audio record these Reiki classes and lectures. 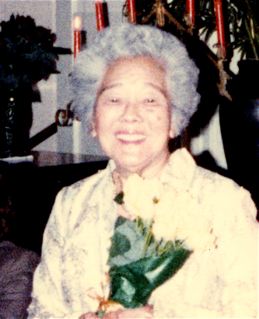 Takata was the guest speaker for the Sunday evening program at the Trinity Metaphysical Center.  The program that evening was a question and answer session, and the persons asking the questions were the members of the audience.  The Reverend Beth Gray presented the questions to Takata.

Because we believe it is vital to maintain the complete integrity of the original  Takata recordings, it has been presented here verbatim.  Any inaudible sounds (word or words) have been noted.  The response to the question, provided by Takata, is presented here in its entirety.  Correct punctuation is attempted.

Reverend Beth Gray:  “Will you speak about reactions?”

Hawayo Takata:  “Yes.  Reactions are active.  Now very few people will have a reaction after one treatment, but if they are very, very ill, they may.  And when reactions come, don’t panic.  But most people will say, ‘Oh, they made me worse.’  But when you feel that you have become worse, that means the whole body has taken effect.  The pure, the (inaudible word), the Reiki is beginning to cleanse you.  And so, the internal organs, the twenty-eight feet of intestines, will be cleansed, and you will start to have diarrhea, and fever.

Now, especially in the chronic arthritis cases, when you have lots of calcium in your body, if your body does not burn, or raise fever, you cannot get the calcium to dissolve.  And so by treating it, and when your body temperature rises, you may have fever for four or five days.  But all during the time, the calcium begins to dissolve.  And it may come out through your urine, through your bowl.  Sometimes it forms a great big sore anywhere.  It could be on the knees, it could be on the elbow, a great big ripe tomato-like, and that’s filled with dissolved calcium.  And this patient asked me, ‘Mrs. Takata, what do you do (inaudible word), fork, knife, or a needle?’  I said, ‘No.  We Reiki.  We just treat.  We are not surgeons.  We are not doctors.  So all we have to do is to treat, and we’ll leave it up to nature, and see what happens.  But be sure to have a double bed sheet by your feet.  Someday this is going to burst.’  And while treating, this became very, very raw, and then it burst.  And, you know, the force of this ripe tomato was so hard that it splashed, not only the walls, but to the ceiling.  He grabbed the sheet, put it on, and then I squeezed it, and then it drained for five to seven days.  And before, the hole was that big, but before it completely healed, I told him,  ‘Now that your swelling from your feet and your thighs and legs and all your arms have gone, and you can walk now without pain, please go to your doctor, and check with him and tell him about this.’

So, he did.  And the doctor was very, very happy.  And of course, while the doctor was examining and looking at the hole, he squeezed it.  And when he squeezed it, something like cottage cheese jumped out.  And that was all the calcium that had gathered from the body.  Now, this man had 13 years of arthritis, and he was not an old man.  He was only about 45 years old.  But he was unable to work.  He was bedridden …  bedridden.  And pain, pain, pain.  So, when you entered his home, on the door it says, ‘Please, do not slam the doors.  The screen door has rattles, so please do not slam.  Please, do not turn on the TV.’  Everything that (has) vibrations (she claps), even that hurt him more.  And so when he got well, he did get well to a perfection.  And he lost … he was about 175 pounds, and he came down, and he minused, he minused about 35 pounds.  And so he could wear his wedding suit at that time, and he went to the doctor, and showed him, and said, ‘This is where it came out.’  And the doctor said, ‘If this had covered the whole surface,’ he said, ‘I would not have believed it.

But seeing is believing, and I’m very happy you had the sense to come when this was still (inaudible word).’  And the first thing I told him, I said, ‘Every Sunday, you used to argue with your wife.  Your wife said, ‘Let’s go to church.’  And he said, ‘Oh, I have to go fishing.’  And he would say, ‘Today, I have to clean my yard.’  And then he always had some kind of alibi, but never went to church.  And so, I say to him,  ‘Now that you have gone to the doctor, and find yourself okay, the first thing you are going to do is to go to the house of God, and thank God.  Take your wife down.’  It was only two blocks … that was the Episcopalian church.  And so I said, ‘Wear your shoes and your Sunday clothes, take your wife’s arm, and walk to the church, now that you can walk.  And, you walk right to the altar, and then, bow your head, and then thank God for having mercy, and grace, and for the, healing.’  I said, ‘It was through God power, that you were healed, and, it was not (inaudible word), I only gave you the time.’  And then, the wife followed the diet.

And so, in 30 days, 13 years of arthritis was absolutely gone.  And so, that is another happy, happy story.  But it ended it.  You have to remove the cause, and then the effect.  No effect … if you remove the cause there shall be no effect.”